Patagonia. The name derives from an early Magellan expedition in 1520 to describe the native people who were then believed to be giants. The land mass rises from Tierra del Fuego, forming a spine-like backbone above the Southern Icefield and continues on into the Andes (eventually leading to the highest point in the Western Hemisphere). Within this range, the myth and lore of the region also reach incomparable heights. Anyone who has experienced Patagonia knows it produces insatiable curiosity as one of the worlds’ remaining “terra incognita”. 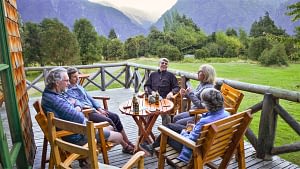 The summer season in the southern hemisphere did not disappoint. Clients young and old journeyed through forests of 3000 year old trees and along towering Andean peaks carved by fire and ice. What an awe-inspiring display! The Trinidad trail in the Cochamó Valley makes for a dramatic entrance into this mysterious valley. Add in the unforgettable cultural exchanges with our local hosts, combined with delectable Chilean wines and the magic is palatable. For years access to this place was only heard about from one adventurer describing it to another. 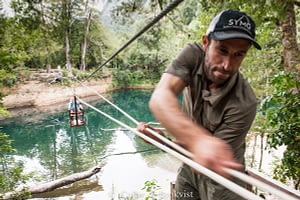 From a dense forest canopy emerges the first glimpse of the granite peaks of the ”Yosemite of South America”. One client turned and without words, just shook my hand and then went back to staring off in the distance. Ah! The moment didn’t require words and his gesture summed up what we all felt in that moment… gratitude. As a guide it was one of the those memories that you’re just so proud to be sharing with others. When the organization and logistics have all paid off, we find ourselves, a group of people, enjoying the right place at just the right time. 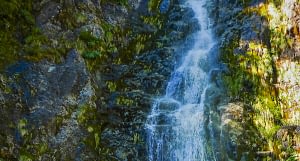 Graham Ottley
View More Posts
Born and raised in the Midwest (Iowa & Illinois), I always held a fascination for the outdoors and mountain landscapes as some “distant place” on maps. That fascination continues today but I am fortunate to have now lived and worked in the mountains for 15+ years. My first job as a guide was leading sea-kayak trips in coastal Ketchikan Alaska. After that season, I attended undergrad in the Southeast (Montreat College) studying Outdoor Education and Environmental Studies and went on to pursue my MBA. I first visited the Yosemite area during a spring break climbing trip with some buddies. I can vividly recall driving in and being completely awestruck by the beauty of The Valley, ...as well as all the great climbing : ) After college I worked as a Guide with Summit Adventure in Yosemite as well as internationally in the Ecuadorian Andes and mountains of Mexico. I enjoyed teaching outdoor education in Santa Cruz and Yosemite Valley during my off-seasons. I also worked with Outward Bound California leading youth trips and eventually worked as Program Director at their Midpines and Joshua Tree locations. In 2016, I transitioned to SYMG and appreciated the thoughtful approach to the work of guiding. I enjoy spending time with the great crew of guides that come here to work, live and play. Beyond work in the outdoors, I am a proud father of two children, Owen & Eleanor. I enjoy adventures with them and my wife Sarah not quite as far afield. While we still return regularly to visit family in the midwest, we are happy to call Southern Yosemite home.
General Manager

SYMG: The Guides who know Yosemite

Nobody knows Yosemite and the High Sierra like us. We're based just outside of Yosemite National Park and have spent our lives hiking up, down and over the High Sierras.

Listen to a story 30 Years in the Making!